Myriam Gevers was born of Belgian parents in the Perigord region of southwest France. She received her teaching diploma from the Toulouse Conservatory, where she won the First Prize in violin performance. She earned her Certificate of Baroque Violin in Den Haag, Netherlands, for her studies with Sigiswald Kuijken, after which she spent several years recording and performing with the famous Petite Bande Orchestra.

She has performed widely with many Baroque orchestras, including the Chapelle Royale of Philippe Herreweghe, Les talents lyriques of Christophe Rousset, Cappriccio Stavagante of Skip Sempe and Les Passions of Jean-Marc Andrieu .

She has also had the pleasure of performing the Bach Passions under Gustav Leonhardt, and recording the Haydn symphonies with Sigiswald Kuijken.

Ms. Gevers has served for 15 years as Concertmaster for Les Arts Florissants, under the direction of William Christie. With them she has performed worldwide, as well as made landmark recordings of such French Baroque masterpieces as the Médée of M.A Charpentier, Les Indes Galantes, Les Fêtes d'Hébé, Zoroastre… of Rameau, Mondonville grands motets , Montéclair "Jephté"… In 1999 she created "Hunc Igitur Terrorem"  by Betsy Jolas, a contemporary piece  written purposely for the Arts Florissants. Ms. Gevers plays a 1749 Jean-Baptiste Salomon Parisian violin, and currently lives in Caen, Normandy. 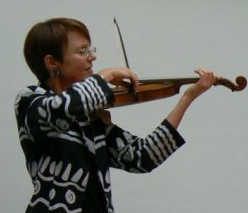