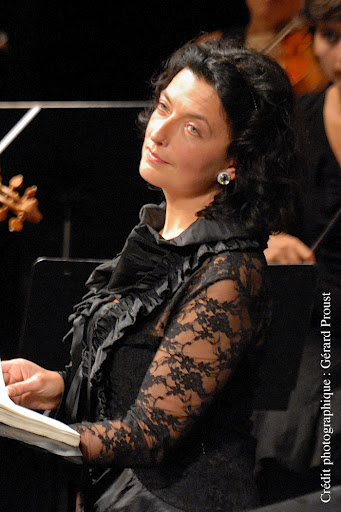 ​After speding seven years at the Maîtrise de Radio France and three years at the Ecole Nationale d'Art Lyrique (National School of Lyric Art) in the Opéra de Paris, Isabelle Poulenard participates in numerous productions of the Atelier Lyrique of Tourcoing, under the direction of Jean-Claude Malgoire. Her repertoire is quite diverse spreading from Baroque opera to contemporary creations without leaving out work by Mozart, Rossini, Weber, Poulenc, etc. Her musical curiosity leads her to perform variety songs in a show called " La Folle Soirée " (A crazy evening), with the participation of Nathalie Steinberg (piano) and Sylvie Ottin (production).

She has the opportunity to work with conductors such as Charles Dutoit, Mstislav William Christie, Marc Minkowski, Theodor Guschlbauer, René Jacobs, Richard Hickox, Mark Foster, Joël Suhubiette… and appears frequently in recitals. During the 2002-2003 season, she plays the role of Norina in Don Pascal by Donizetti under the direction of Alan Altinoglu and staged by Jean-Luc Revol. During the 2004-2005 season, she plays the role of Soeur Constance (Sister Constance) – dialogues of Carmelite nuns Poulenc – under the direction of Jean-François Verdier and staged by Eric Pérez.

Within a discrography counting over 50 recordings let us mention Montezuma, Opera Pasticcio by Vivaldi (Teutile character) wich was awarded a Victoire de la Musique in February 1993 and the Stabat Mater by Pergolesi (directed by Jean-Claude Malgoire), the Mass in Ti by Bach directed by Gustav Leonardt, Il triomfo del Tempo by Haendel under the direction of Marc Minkowski (Bellezza role), a recital disc Stroeei-Stradella at Adda and the Stabat Mater by Gasperini, Abos and Tartini with Les Paladins orchestra  (Jérôme Corréas) are published under the Arion label.

With the same ensemble, she has participated in the recording of an oratorio by Hasser : "Les serpents de feux dans le désert" (Fire snakes in the desert) under the Festival of Ambronay label. Let us not forget either, published in 1998, under the Astrée/Audivias label, a recording of Lieder & Sonaten by Johann-Friedrich Reichardt, co produced by Westdeutscher Rundfunnk of Cologne.